World First Review: Is it safe? How does it work? What are the rates?

How can you use World First to send money abroad? Is their service reliable? Can you trust World First with your money? How good are their fees and exchange rates?

As of April 10 2021, customer-to-customer money transfers are no longer supported by World First, except for those from Australia. Business-to-business money transfers remain available. If this affects you, be sure to compare your alternatives below:

World First is one of the best established and well known specialist currency exchange providers. Headquartered in the UK, they provide dedicated international money transfers around the world. World First serves individuals and businesses, including online e-commerce exchange services.

Like many specialist currency providers, World First is designed for transferring larger amounts overseas, and they have a minimum transfer limit of £250 (or the equivalent in a local currency) online or £1,000 over the phone. Money can be transferred using their website, via calling their customer service centre, or through using their mobile app on Android, iPhone or Android Watch.

Although they are not as keenly priced as some other specialist currency exchange providers, this is offset by an extremely high level of service. We recommend them for individuals and businesses who are not exceptionally price-sensitive, but who want the reassurance of reliable currency transfers coupled with a personal account manager.

In summary, World First provides a very high-quality service combined with a dedicated account manager. Although they do not have the lowest fees, they are ideal if you want reliable, trustworthy exchange rates with a personal touch. 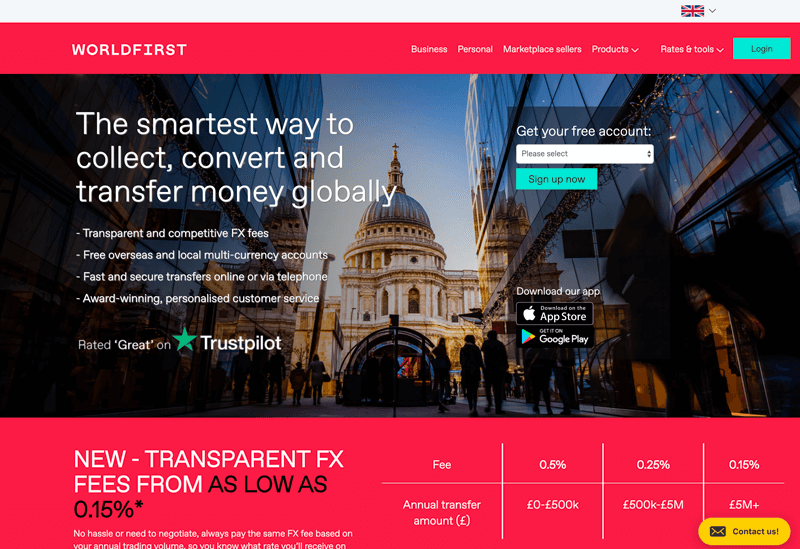 What we dislike about World First

World First also says, “And we try our best to make sure all your money gets to where it needs to by covering correspondent and receiving charges where we can.”

Please note that receiving banks may charge to receive money, so it’s worth checking with the receiving bank to understand any likely fees. You should speak with your World First account manager to see if they would cover those receiving fee costs.

World First’s exchange rates are around 1% below the mid-market, interbank rates—the standard measure for exchange rate currency pairs. That means for every $1,000 you are transferring, you are paying $10 in the difference between the “best” exchange rate and what World First charges.

They state that they can save you around 0.25% to 4% of the amount being transferred compared to a bank.

World First does offer a price promise. They are confident they can offer excellent exchange rates, so if you’re able to get a better quote from another provider, they state they will match it, as long as it doesn’t result in a loss for them.

One of the most important factors when deciding on the right currency exchange provider is how safe and secure they are. We have no hesitation in recommending World First as a trustworthy, secure, effective way of transferring money. We base our recommendations on several key areas:

Work First is regulated by the Financial Ombudsman Service (FOS) in the UK (membership number 13405) and by the Australian Securities and Investments Commission in Australia (AFS Licence number 331945). Both regulatory bodies have strong requirements for encryption, security, and protection of user data.

World First also holds sufficient capital and reserves to meet its customers' commitments and safeguard its business. They have a “3A2” rating from Dun and Bradstreet credit agency, which means they are a “low risk” business and have large capital reserves.

Client funds are held completely separate from World First’s own business accounts, in segregated accounts. Should the company have any financial difficulties, your money would be safe.

World First has successfully transacted over £60 billion ($75 billion) in international transfers, over 1,000,000 transactions, for over 70,000 customers. They have consistently grown their business year on year.

97% of reviewers rated World First at four or five stars for the quality of their service.

World First has over 70,000 customers and has transferred funds for individuals, businesses, and e-commerce services. They have managed over a million transactions and transferred over £60 billion ($75 billion). They hold over £400 million in assets and made profits in 2015 of £15 million on revenue of £57 million.

World First has won several awards for its service excellence, including the Canstar Outstanding Value for International Money Transfers, The Queen’s Award for Enterprise, and the UK Customer Experience Awards.

So, is World First safe? Absolutely, we wouldn’t hesitate to trust them even with transfers of large amounts.

We looked at over 200 reviews of World First on Feefo and found that reviewers gave World First an overwhelmingly positive score of 4.8 out of 5 stars.

As expected, many of the reviews focused on how helpful World First’s customer service is, with some reviewers saying it felt like World First were an extension of their internal team. Another user said, “Superior service from excellent, knowledgeable, efficient account managers!” and was impressed with how easy it was to understand the currency transfer process.

Other users cited the speed of World First’s transfers, and the competitive exchange rates, while another reviewer summed things up succinctly, “Easy, fast, safe and cheap as always.” It’s notable that if any users reported less than optimal experiences, World First responded directly to the reviews, offering to help out.

There were a small number of negative reviews. Key issues from these users included trades lapsing because they were not called back by World First, or the occasional breakdown in communications between World First and its customers. One user did state they wished the online transfer service was easier to use. It’s important to note that only 3% of all reviews for World First were rated at lower that three stars, while 97% of reviews were rated at four or five stars.

The story behind World First

World First was created in 2004 by Nick Robinson and Jonathan Quin. Initially operated from a basement flat in Stockwell, London. Intended as a speedy, effortless way to transfer money and offer currency exchange at a better rate than the big banks, World First became popular quickly, booking £43 million in trades in the first year. They reached £1 billion in transactions by 2007.

Although Nick and Jonathan had experienced in the corporate banking industry, their real success came from creating a first-class customer service team. They combined that with fast, efficient technology and created dedicated systems to lower the cost of international money transfers.

This resulted in a secure, honest, and transparent organization, where savings on exchange rates are passed to the end customer. Since 2009, World First has been an “Authorized Payment Institution,” meaning client funds are protected from creditors.

World First has over 70,000 customers and has transferred funds for individuals, businesses, and e-commerce services. They have managed over a million transactions and moved around £60 billion ($75 billion) in funds. They are typically used for salary transfers, export, import, mortgage payments, investments, business payments, and more. They are currently growing by around 40% a year, and are among the fastest-growing FinTech companies in the world.

World First has expanded considerably beyond a basement flat in Stockwell. They are now a global business headquartered in Millbank Tower, London and with offices in Sydney, Hong Kong, Singapore, Washington, The Netherlands, and the U.S. They currently employ over 300 people around the world.

Other Activities with World First

Send money from Australia to Nepal

Send money from Germany to Canada

Send money from France to India

Send money from Australia to Colombia

Send money from the USA to Mexico

Compare World First to 300+ other providers

Questions you may have

Before you make an international money transfer, compare the costs of the different options on Monito. Rates and fees change often, so for the best deal, do a comparison before every transfer — they may have changed since you last sent money. Once you enter the details about where you are sending money from and to, click on compare. You’ll see a list of all the options to send money between two countries. The best option is at the top, but you may want to consider other criteria such as the speed of transaction or the pay-in or payout methods.

We only compare money transfer operators or banks that are fully authorized and monitored by the regulatory authorities of their operating countries.

Monito is an independent company based in Switzerland. We have an affiliate partnership with World First, this means that we generate revenue when we refer new customers to World First.

We have such affiliate agreements with all the main and innovative providers of the industry, which allow us to remain independent and provide accurate and honest information to our users. This review of World First is based on objective and verifiable criteria.

You’re probably all too familiar with the often outrageous cost of sending money abroad. After facing this frustration themselves back in 2013, co-founders François, Laurent, and Pascal launched a real-time comparison engine to compare the best money transfer services across the globe. Today, Monito’s award-winning comparisons, reviews, and guides are trusted by around 8 million people each year and our recommendations are backed by millions of pricing data points and dozens of expert tests — all allowing you to make the savviest decisions with confidence.

Monito is Trusted by 15+ Millions Users across the globe.

Monito's experts spend hours researching and testing services so that you don't have to.

Our recommendations are always unbiased and independent.

Instead of banner ads and paywalls, Monito makes money through affiliate links to the various payment service providers featured on our website. While we work hard to scout the market for the best deals, we're unable to consider every possible product available to you. Our extensive range of trusted affiliate partners enables us to make detailed, unbiased, and solution-driven recommendations for all types of consumer questions and problems. This allows us to match our users with the right providers to suit their needs and, in doing so, match our providers with new customers, creating a win-win for everybody involved. However, while some links on Monito may indeed earn us a commission, this fact never impacts the independence and integrity of our opinions, recommendations, and evaluations.